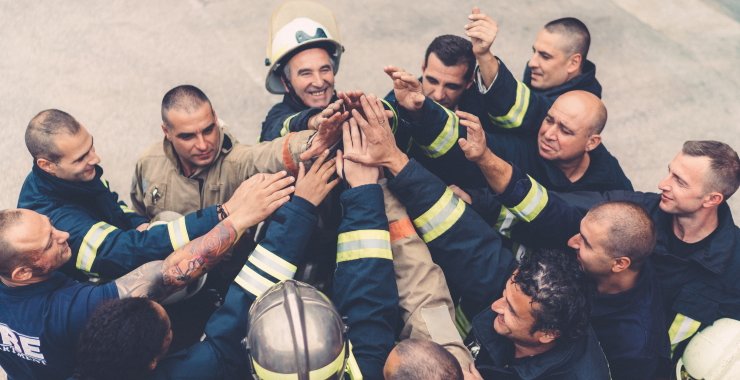 Fire departments throughout the country are embracing peer support programs as a bridge to treatment for firefighters who need it.

Mike Feyh spent years in uniform fighting in Iraq, but he faced his biggest mental health challenge in 2010 after he returned home to California and went to work as a firefighter. “I had a little incident when I got blown up in an explosion, and I had PTSD,” he said. Feyh, a fire captain who now serves on the two-man behavioral health unit of the Sacramento Fire Department, opened the front door of a house that exploded. An arsonist had lit a candle and cut the gas line, and four firefighters were injured. Feyh was burned, and three other members of the crew were injured. “One of the guys was having flashbacks in the hospital,” he said. At the time, his department — along with many others throughout the United States — held its crews to a mandate that first responders attend post-incident mental health debriefing. “We did a formal debriefing,” Feyh said, “and it did not go very well at all. People were struggling with what happened. But they did not want to come in and talk about it.” That strategy — mandatory debriefing — is being revisited as departments throughout the country embrace peer support programs as a bridge to treatment for firefighters who need it.

The clinicians and peer support counselors who staff behavioral health units talk about the hidden side of the fire service: the PTSD, depression and substance abuse that firefighters will suffer in silence. “First responders have significantly higher rates of anxiety and depression,” said Alyssa Lanza, a clinical psychologist in Bethesda, Maryland, who is a disaster response mental health practitioner. “Substance abuse is a more socially acceptable way to cope. There's an overall decrease of quality of life and less ability to keep doing the job.” But the fear of losing that job because of lack of mental fitness or the fear of being perceived as weak can prevent firefighters from seeking treatment. Also, Lanza said, immediate follow-up doesn't help everyone after an incident. “If you do it too soon, it's retraumatizing,” she said. “Every approach has pros and cons...There's a variety of people who need a variety of different types of treatment.”

Behavioral health units — once the province of big-city departments like New York and Boston — are becoming more common in small and midsized fire departments. As these units become more common, fire departments are embracing new treatment models to break the stigma. In the last five years, the International Association of Fire Fighters has rolled out programs that have trained thousands of firefighters in peer support techniques. Separately, in California, a new law will extend confidentiality laws to peer supporters and bolster training for peer support programs at all levels of the fire service.

The IAFF recognized the need to take a larger role to support behavioral health in 2015 following strong reaction to an article on PTSD in Fire Fighter Quarterly. The story pointed out that “symptoms include recurrent or persistent recollections or dreams about the event, intense distress when reminded of the trauma by another event and difficulty functioning and performing day-to-day tasks.” “The phone started ringing off the hook,” said Sarah Bernes, a licensed master social worker and behavioral health specialist for the association. “Our members started calling and saying, ‘I didn't know what this [feeling] was.'"

In a partnership with Advanced Recovery Systems, the organization opened a 64-bed treatment facility for firefighters and paramedics in Upper Marlboro, Maryland. Since 2017, more than 1,000 members have received treatment for substance abuse and accompanying issues such as PTSD, depression and anxiety. The organization also started offering a peer support training program on a large scale. The two-day, in-person program emphasizes individual skills, such as confidentiality and active listening, as well as organizational skills, such as how to start and enhance a peer support program. Since March 2016, more than 5,400 people have completed the program. The courses are standardized. They maintain a 15:1 student-to-instructor ratio, and each class has two master instructors, which include a firefighter and a clinician. Another 7,800 fire personnel have completed IAFF's online behavioral health training program. The emphasis on peer support speaks to the culture of the fire service. “Because the fire service is such a brotherhood and sisterhood, firefighters prefer to lean on each other,” said Doug Stern, director of media relations for the IAFF. “We talk about peer support as a bridge to other treatment.”

The organization is preparing to start a program to train and prepare clinicians to work with firefighters. Sometimes, Bernes said, clinicians are overwhelmed by the stories that firefighters tell. “They tell us their clinicians break down and cry,” she said. “They felt like they were hurting the clinician.” Part of the program will involve putting clinicians through Fire Ops, a one-day training session that simulates the experience of responding to calls. “Literally, they are putting a fire out,” Stern said. “They see what it's like to search through a building with the fire all around you...It really is about immersing laypeople in what firefighters are doing.” First responders can face tough consequences for seeking counseling; lack of mental fitness can cost them their jobs.

In Texas, Suzy Bird Gulliver is director and chief of the Warriors Research Institute through the Baylor Scott & White Health Research Institute. She administers a protocol-driven, evidenced-based treatment program through a telehealth clinic. If firefighters seek treatment through this program, they are not required to notify their employers about that treatment. In posttreatment critiques of the program, Gulliver said, three words consistently show up: “No Waiting Room.” “The idea that when you might be feeling vulnerable...having to sit in a waiting room with someone you might know can be very intimidating,” said Gulliver, who is a also a professor of psychology at Texas A&M University. So far, 50 firefighters from 35 departments throughout the state have completed a full course of treatment, which lasts for 60 consecutive weeks. To spread the word about the program, which started with financial support from the Federal Emergency Management Authority, Gulliver sent every fire department in Texas invitations by email and postal mail, with hopes that fliers would be posted in fire stations. Gulliver appreciates the opportunity to work on a new model for delivering behavioral health services to first responders — a model that builds out from the old-school method of requiring firefighters to go to therapy after major incidents. “Hats off to the critical incident movement,” Gulliver said, “because it got the ball rolling. It made a difference. When we subjected critical incident debriefing to really rigorous examination, it didn't hold up well, because people grieve and process differently and in their own time.

The scientific community said we need more models.” The new models benefit cities and fire departments by keeping highly trained employees on the job. Gulliver pointed out that it can cost $150,000 to educate a firefighter who is just starting out. “Firefighters are not inexpensive to train and maintain and keep current,” she said. “They're not easily replaced...You need to keep that team strong.”

In California, a new law will strengthen the ability of peers to serve as a bridge to care within fire departments. Assembly member Tim Grayson, the author of the bill, saw the need to strengthen peer support programs while serving as a chaplain for the Concord Police Department in Northern California. One summer, he said, the community experienced an uptick in child drownings. When he responded to these incidents as a chaplain, Grayson would watch for the responses of the officers — from stuttered speech to shrinking posture to signs of withdrawal. He introduced the legislation so that not only could more peer counselors be trained, but so that those counselors could assure first responders of confidentiality as well. “There is an incredible stigma that comes with anything that is related to mental health,” Grayson said. “And rightly so. They are concerned...about repercussions that come, with certainty, on the job. They have to be physically and mentally fit.” It took three years to pass the bill, Grayson said, because the notion of extending the privilege of confidentiality proved to be controversial. “A very limited amount of people enjoy that confidentiality,” he said. “Allowing a public agency to have that privilege was huge. It's being received tremendously well across the state.”

It took several years to get the bill through the legislature, but it made it over the finish line with the revelation of a striking statistic: In 2017, more firefighters died in the United States as the result of suicide than died in the line of duty. According to a white paper commissioned by the Ruderman Family Foundation, 103 firefighters died as the result of suicide that year. By comparison, 93 firefighters died in the line of duty that year. The study pointed out that “the shame and stigma surrounding mental health within professions that prioritize bravery and toughness” can be a significant barrier to treatment. Feyh, the fire captain in Sacramento, can attest to that stigma. He said that the behavioral unit used to be called the “secret police,” because the firefighters thought it was bad news if they showed up. But he observed that ducking treatment could backfire, and a firefighter could lose his job anyway. “If a guy was struggling with a substance abuse issue, [the crew] would close ranks around him,” Feyh said. “They would kill the issue. It would lead to some kind of disciplinary proceeding. Sometimes we would find out they were struggling in silence.” Now, he said, a battalion chief will call in his unit if needed. It's not uncommon, he said, for the peer support team to be called in after a crew responds to a Sudden Infant Death Syndrome incident. They will stop by the station the day after the incident, or the next time the crew is on shift. “We're not coming in and saying, ‘You're going to sit down in this room and tell us how you're feeling,' ” Feyh said. “We'll say, ‘Walk us through what happened. Tells us about it.' “With something like that, there will be one or two people it's affecting more. We'll see which individuals have been struggling.” While showing up is voluntary, he said, usually no one from the team will sit out the session. “Some of your hard-case people, sometimes they'll end up opening up, and end up showing more,” Feyh said. “When I come in, everybody knows me. I can usually chat with most people, and they engage with me. Most of our peer supporters are people who are really well-respected.”